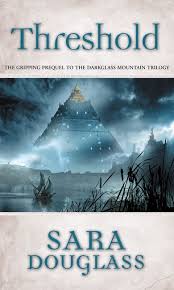 Title:
Threshold
Douglass, Sara
$14.00
The Barnes & Noble Review Bestselling Australian fantasy writer Sara Douglass, author of the epic Wayfarer Redemption saga (BattleAxe, Enchanter, StarMan, etc.), has penned a stand-alone novel entitled Threshold, set in a fantasy world reminiscent of ancient Egypt. The main character, a slave girl named Tirzah, must somehow persuade her master, Magus Boaz, to stop construction of a centuries-long project -- a gigantic glass pyramid called Threshold -- that will theoretically open a passage to Infinity and give the Magi of Ashdod immortality. What the Magi don't realize is that there may be something on the other side of the dimensional portal that will be unleashed once Threshold is completed. The project, which has cost untold hundreds of slaves their lives, is almost complete when Tirzah and her father -- highly skilled glassworkers enslaved because an unpaid gambling debt -- are brought to Ashdod to help finish the pyramid. Tirzah soon joins forces with other slaves in a plot to overthrow the Magi and somehow destroy Threshold. Douglass states on her web site (www.saradouglass.com), that Threshold is her favorite book. You may well agree with her. Paul Goat Allen
Second hand Paperback
Stock:
1
ISBN:
9780732257491
SKU:
10015
Science Fiction/Fantasy sf

The Long Way to a Small Angry Planet

The Ocean at the End of the Lane