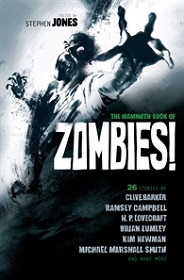 Title:
The Mammoth Book of Zombies!
Jones, Stephen (Edited by)
$16.00
The zombie - a soulless corpse raised from the grave to do its master's bidding - may have had its factual basis in the voodoo ceremonies of the West Indies, but it is in fiction, movies, video games and comics that the walking dead have flourished. What makes a zombie? This Twentieth Anniversary Edition of one of the first and most influential zombie anthologies answers that question with 26 tales of rot and resurrection from classic authors such as Edgar Allan Poe, H. P. Lovecraft, M. R. James and J. Sheridan Le Fanu, along with modern masters of the macabre Clive Barker, Robert Bloch, Ramsey Campbell, Hugh B. Cave, Joe R. Lansdale, Brian Lumley, Graham Masterton, Kim Newman, Michael Marshall Smith, Lisa Tuttle, Karl Edward Wagner and many more. From Caribbean rituals to ancient magic, mesmerism to modern science, these terrifying tales depict a wide range of nefarious methods and questionable reasons for bringing the dead back to life again.
Second hand Paperback
Stock:
1
ISBN:
9781472106681
SKU:
67292
Science Fiction/Fantasy sf

The Long Way to a Small Angry Planet

The Ocean at the End of the Lane