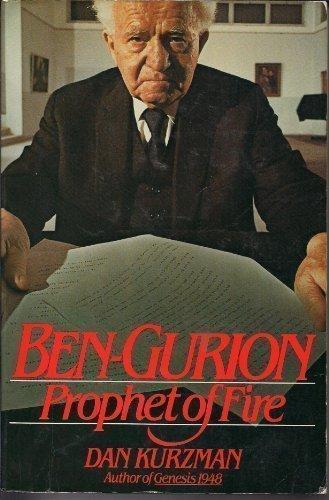 Title:
Ben Gurion - Prophet of Fire
Kurzman, Dan
$18.00
David Ben-Gurion, who more than any other man was instrumental in the founding of the state of Israel, was one of the giants of our time. More than a statesman, he was a modern prophet whose influence even now over a decade since his death, continues to stir the Israeli conscience and shape events in the Middle East. In this, the winner of the 1984 National Jewish Book Award of biography, Dan Kurzman has written the definitive account of Israel's first prime minister, a book that chronicles the creation of an entire nation as it provides an unforgettable portrait of the life and times of this great leader. Drawing from extensive research, Kurzman-author of the acclaimed Gensis 1984 and The Bravest Battle- traces Ben-Gurion's ascent from local labor leader to prime minister. With illumination detail, he captures the charismatic personality, the brilliant political strategy and ceaseless energy behind Ben-Gurion's fierce, and ultimately triumphant, vision of building the Jewish state.
Second hand Trade Paperback
Stock:
1
ISBN:
0671528211
SKU:
62160
Hist, Geog - Jewish History / Israel

Hooray for Yiddish - A Book about English

A History of the Jews - Phoenix Giant edition

Out of Egypt: A Memoir