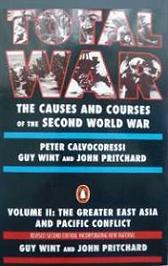 Calvocoressi, Peter and Wint, Guy and Pritchard, John
$15.00
An examination of the causes and courses of World War II. This edition takes account of the flood of official archives and personal memoirs that have been made public in recent years. These have necessitated a review of the policies of appeasement in Europe and Japan in the 1930s. For the war itself, Peter Calvocoressi has woven into his narrative the story of the broken Enigma ciphers that he was not allowed to tell in the first edition. John Pritchard, using his knowledge of the pre-war problems and policies of the Powers in East Asia and the proceedings at the Japanese war crimes trials, gives an analysis of the disintegration of the European Empires of the East and the triumphs, horrors and retributions of the Japanese war on land and sea.
Second hand Paperback
Stock:
1
ISBN:
9780140129144
SKU:
57441
War - WW2

Wilkinson, M. and Photographs by the Daily Mail

The Recollections of Rifleman Bowlby

D-Day: 24 Hours That Saved the World