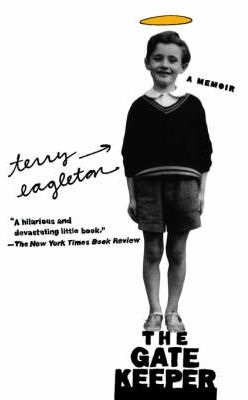 Eagleton, Terry
$15.00
Oxford professor, best-selling author, preeminent literary critic, playwright, screenwriter, and novelist, Terry Eagleton knows all about the claims of competing worlds. One of his earliest roles growing up Catholic in Protestant England was as "the gatekeeper"-the altar boy who at reverend mother's nod literally closed the door on young women taking the veil, separating the sanctity of the convent from earthly temptations and family obligations. Often scathingly funny, frequently tender, and always completely engaging, THE GATEKEEPER is Eagleton's memoirs, his deep-etched portraits of those who influenced him, either by example or by contrast: his father, headmasters, priests, and Cambridge dons. He was a shy, bookish, asthmatic boy keenly aware of social inferiority yet determined to make his intellectual way. "Our aim in life," he writes of his working-class, Irish-immigrant-descended family, "was to have the words 'We Were No Trouble' inscribed on our tombstones." But Eagleton knew trouble was the point of it all. Opening doors sometimes meant rattling the knobs. At both Cambridge and Oxford, he gravitated toward dialectics and mavericks, countering braying effeteness with withering if dogmatic dissections of the class system. THE GATEKEEPER mixes the soberly serious with the downright hilarious, skewer-sharp satire with unashamed fondness, the personal with the political. Most of it all it reveals a young man learning to reconcile differences and oppositions: a double-edged portrait of the intellectual as a young man.
Second hand Paperback
Stock:
1
ISBN:
9780312316136
SKU:
11559
Literary Biographies Lit Biog

The Secret Life of France

Happiness - A Memoir - The Crooked Little Road to Semi-Ever After