We are delighted to be open

Our Queen's Birthday hours on Monday 1 June are 12 till 6.

There are Covid-19 protocols in place to keep our staff and customers safe.

Please abide by these and please don't visit us if you are feeling unwell.

Please note, we will NOT be buying or exchanging books under Level 2.

Thank you for your on-line support during Level 3 and for your patience with the delays in delivery.

We look forward to seeing you all in store soon. 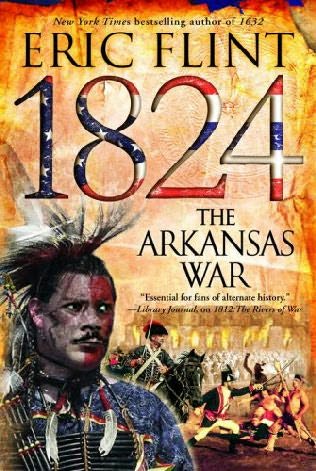 Flint, Eric
$25.00
In the newest volume of this exhilarating series, Eric Flint continues to reshape American history, imagining how a continent and its people might have taken a different path to its future. With 1824: The Arkansas War, he spins an astounding and provocative saga of heroism, battlefield action, racial conflict, and rebellion as a nation recovering from war is plunged into a dangerous era of secession. Buffered by Spanish possessions to the south and by free states and two rivers to the north, Arkansas has become a country of its own: a hybrid confederation of former slaves, Native American Cherokee and Creek clans, and white abolitionists-including one charismatic warrior who has gone from American hero to bete noire. Irish-born Patrick Driscol is building a fortune and a powerful army in the Arkansas Confederacy, inflaming pro-slavers in Washington and terrifying moderates as well. Caught in the middle is President James Monroe, the gentlemanly Virginian entering his final year in office with a demagogic House Speaker, Henry Clay, nipping at his heels and fanning the fires of war. But Driscol, whose black artillerymen smashed both the Louisiana militia in 1820 and the British in New Orleans, remains a magnet for revolution. And fault lines are erupting throughout the young republic-so that every state, every elected official, and every citizen will soon be forced to choose a side. For a country whose lifeblood is infected with the slave trade, the war of 1824 will be a bloody crisis of conscience, politics, economics, and military maneuvering that will draw in players from as far away as England. For such men as Secretary of State John Quincy Adams, Commissioner of Indian Affairs Sam Houston, charismatic war hero Andrew Jackson, and the violent abolitionist John Brown, it is a time to change history itself. Filled with fascinating insights into some of America's most intriguing historical figures, 1824: The Arkansas War confirms Eric Flint as a true master of alternate history, a novelist who brings to bear exhaustive research, remarkable intuition, and a great storyteller's natural gifts to chronicle the making of our nation as it might have been.
Hard Back
Stock:
1
ISBN:
SKU:
38161
New Science Fiction

Into The Flames (Royal Orchid - A prequel)

Fall Or, Dodge In Hell

The Unreal and the Real Volume 1 Selected Stories of Ursula K. Le Guin: Where on Earth