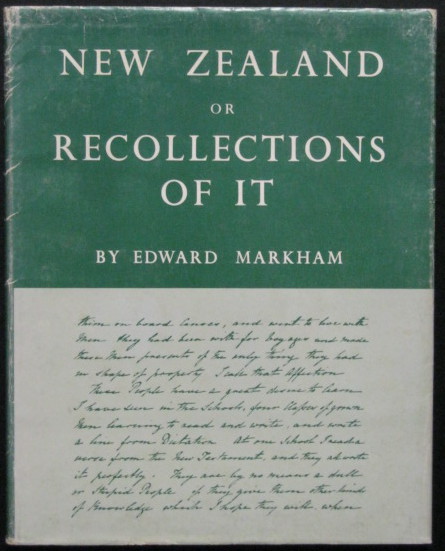 Title:
New Zealand or Recollections of It
Markham, Edward
$45.00
in 1834 the Regency buck Edward Markham spent eight and a half months in New Zealand, first in the Hokianga district and later in the Bay of Islands. On returning to England he compiled his 'Recollections' of the wild and distant country of which he had been a temporary resident. Markham had little education and few literary gifts, but he described his experiences with unusual candour and left memorable, if irreverent, portraits of such figures as James Busby and F.E. Manning. For over half a century his manuscript has lain in the Alexander Turnbull Library, Wellington, contributing its quota of fact and error to works on New Zealand history. - from the inside cover. New Zealand or Recollections of It Edward Markham R.E. Owen, Government Printer Wellington 1963 Hard-back Green board with gilt titles on spine. Good second-hand condition. Binding tight. Pages clean. Dust-jacket scuffed and creased on the edges, especially top and bottom spine, otherwise intact.
Second hand Hardback
Stock:
3
ISBN:
0000000000000
SKU:
52311
NZ History / General

Looking Back: A Photographic History of New Zealand