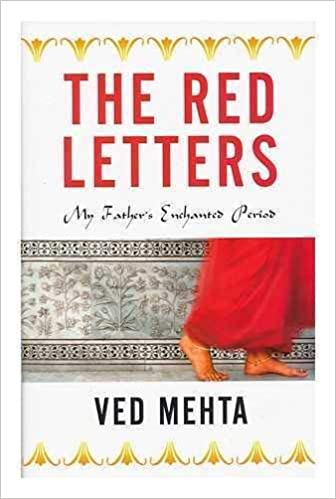 Title:
The Red Letters - My Father's Enchanted Period
Mehta, Ved
$24.00
The story has its origins in the sixties, when Mehta by chance finds his father weeping uncontrollably on his mother’s shoulder during a New York dinner party. As a result, the son begins to unravel a family mystery that takes him on a painful and revealing voyage into his father’s British past in Simla, the magical hill station. Step-by-step, he is forced to confront his father’s passionate clandestine affair with Rasil, an exquisite beauty who in her teens was abducted from her poor family and raped. She was subsequently rescued by a Hindu philanthropist, only to end up trapped in an abusive marriage to a rich businessman. Mehta’s exploration of his father’s love affair proves painful, as the son realizes that the entanglement, a passing episode in sixty-one years of a loving marriage, had shattering psychological side effects on his mother—a close friend of Rasil’s—and also on his own life. The Red Letters is Mehta’s masterpiece, a work of extraordinary intensity that perfectly re-creates the exotic, closed world of British India.
Second hand Hardback
Stock:
1
ISBN:
9780954352066
SKU:
112137
Literary Biographies (Lit Bio)

To the End of the World - Travels with Oscar Wilde

The Last Leopard - A Life of Giuseppe Tomasi di Lampedusa