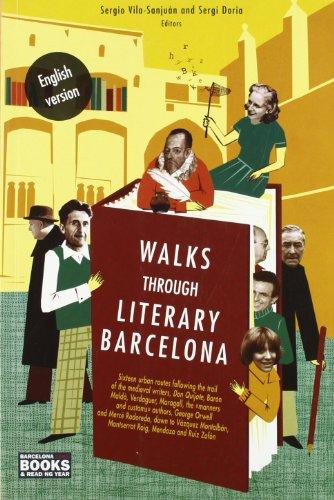 Title:
Walks Through Literary Barcelona
Vila-Sanjuan, Sergio & Doria, Sergi
$40.00
From medieval Barcelona to the post-Olympic period, a wide range of written views, which have given the Catalan capital a strong literary character, open up. Bernat Metge and Juan Boscan wrote in its Gothic shadow. Miguel de Cervantes chose it as the only urban stage for his immortal Don Quijote. Jacint Verdaguer and Joan Maragall made it poetic. Narcis Oller and Josep Maria de Sagarra centred their great novels in it, portraying the splendour of its middle class and the decadence of its aristocracy. For George Orwell and Simone Weil, it was an unforgettable revolutionary landscape, and for Merce Rodoreda or for Carmen Laforet it was the living space for figures destined to become archetypes. Baron Malda and Josep Pla painstakingly documented its daily life. Jean Genet and Pieyre de Mandiargues sought out its dark side; Salvat-Papasseit and Jaime Gil de Biedma made it the setting for their lyrical autobiographies. In recent years, Barcelona has been a "noir" criminal city in Vazquez Montalban's "Carvalho cycle", while Eduardo Mendoza, Juan Marse, Quim Monzo and Carlos Ruiz Zafon have continued to raise it to the status of undying literary legend. A cross between a travel book and cultural journalism, Walks through literary Barcelona offers a literary and visual journey through the landscapes of these and many other writers, and, with one route after another, confronts us with the uncertainty over which is more real: the city we experience or the one we imagine, and whether the former would be the same had the latter not existed.
Second hand Trade Paperback
Stock:
1
ISBN:
9788483076514
SKU:
62163
Literature - Literary Criticism / Reference (Lit Crit)

The Reading Bug... and How to Help Your Child Catch It

Genius and Ink: Virginia Woolf on How to Read

The Cambridge Introduction to Narrative