We are delighted to be open

We are open normal hours.

There are Covid-19 protocols in place to keep our staff and customers safe.

Please abide by these and please don't visit us if you are feeling unwell.

Please note, we will NOT be buying or exchanging books under Level 2.

Thank you for your on-line support during Level 3 and for your patience with the delays in delivery.

We look forward to seeing you all in store soon. 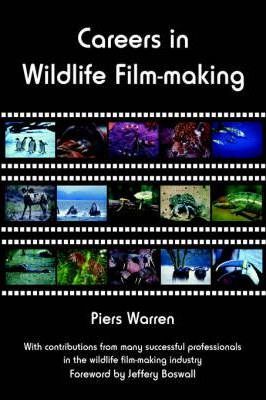 Title:
Careers in Wildlife Film-making
Warren., Piers
$18.00
Careers in Wildlife Film-making is packed with guidance and advice for aspiring makers of natural history films Foreword by Jeffery Boswall "I have to say I am heartily impressed. This book should be compulsory for everyone in the industry, and for anyone yearning to get into it." Jean Hartley - Location Manager, Kenya. "I am very impressed! What I would have given thirty years ago for such a thing." Nick Gordon - wildlife film-maker. If you work in the wildlife film-making industry - or want to - you need this book! . The ONLY guide to working in the wildlife film-making industry. This is an international book featuring many case studies from all over the world - successful professionals explain how they got started and give hard-won advice. . Contents include: How Wildlife Films are Made, The variety of Jobs, How to Get Started, Education and Training, Wildlife Film Festivals, Organisations, Projects and Further Information, The Future of the Industry . Case Studies include: Nick Gordon, Doug Allan, Mark Deeble & Victoria Stone, Mike Holding and Tania "TJ" Jenkins, Peter Crabb, Brian Leith, Jeremy Evans and many more. . The incredible amount of advice, together with information on festivals, schools and industry organisations make this book an invaluable resource for all those wishing to succeed as a wildlife film-maker Described as 'long-overdue' and 'much-needed', this is not just an essential book for newcomers and wannabes - the fascinating case studies of well-known individuals, and unique discussion of the future of the industry from top professionals, make this an important read for those already working in the fields of wildlife, underwater and conservation film. Jobs discussed include: Producer, Assistant Producer, Researcher, Production Assistant, Administration and Publicity Co-ordinator, Director, Cinematographer/Camera Operator, Camera Assistant, Sound Recordist, Presenter, Narration Script-writer, Narrator, Music Composer, Picture Editor, Dubbing Mixer, Location Manager, Distributor, Broadcaster/Commissioning Editor, Stock Footage Library Manager, Multimedia Producer. The section 'The Future of the Industry' involves no-holds-barred views from individuals with a wide variety of experience of wildlife films - combining to produce a fascinating and eye-opening vision of the future of wildlife programming worldwide.
Second hand Paperback
Stock:
1
ISBN:
9780954189938
SKU:
95604
Film & Theatre - Film Technique

Surf's Up - The Art and Making of a True Story

Filming the Fantastic: A Guide to Visial Effects Cinematography

Go Wild with Your Camcorder - How to Make Wildlife Films