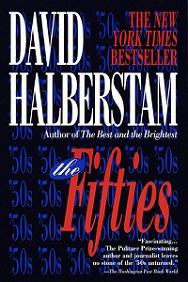 Title:
The Fifties
Halberstam, David
$18.00
Fawcett Columbine, 1994. Good second-hand condition. "The Fifties" is a sweeping social, political, economic, and cultural history of the ten years that David Halberstam regards as seminal in determining what our nation is today. It is the decade of Joe McCarthy and the young Martin Luther King, the Korean War and Levittown, Jack Kerouac and Elvis Presley. Halberstam not only gives us the titans of the age - Eisenhower, Dulles, Oppenheimer, MacArthur, Hoover, and Nixon - but also Harley Earl, who put fins on cars; Dick and Mac McDonald and Ray Kroc, who mass-produced the American hamburger; Kemmons Wilson, who placed his Holiday Inns along the nation's roadsides; U-2 pilot Francis Gary Powers; Grace Metalious, who wrote Peyton Place; and "Goody" Pincus, who led the team that invented the Pill. Here is a portrait of a time of conflict, at once an age of astonishing material affluence and a period of great political anxiety. We follow, among other things, the quickening pace of American life and the powerful impact of national television, still in its infancy, on American society: from the Kefauver hearings to "I Love Lucy" to Charles Van Doren and the quiz-show scandals to the young John Chancellor of NBC covering the Little Rock riots and holding up a disturbing mirror to America.
Second hand Paperback
Stock:
1
ISBN:
9780449909331
SKU:
60873
Hist, Geog - USA

America, 1908 - The Dawn of Flight, the Race to the Pole, the Invention of the Model T, and the Making of a Modern Nation

Designs on the Land: Exploring America from the Air

Geronimo's Bones: A Memoir of My Brother and Me