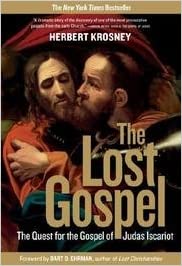 Title:
The Lost Gospel
Krosney, Herbert
$27.00
This compelling and exhaustively researched account reveals the truth behind one of the greatest Judeo Christian archaeology of the century—a 1,600-year-old papyrus manuscript, or codex, containing the only known surviving Gospel of Judas. With all the skills of an investigative journalist and master storyteller, Herbert Krosney traces the forgotten gospel's improbable journey from the sands of the Egyptian desert across three continents—a trek that would take it through the netherworld of the international antiquities trade—until the crumbling papyrus is finally made to give up its secrets. Sold twice, lost once and hidden in a safe-deposit box in Long Island for sixteen years, the story of The Gospel of Judas's amazing trek from the cavern near the banks of the Nile River reads like a "plot from a Hollywood mystery." Was one of history's greatest villains really one of its greatest heroes? Was Judas Iscariot really Jesus Christ's betrayer? With the discovery of the 1,600-year-old Gospel, you can now decide for yourself.
Second hand Hardback
Stock:
1
ISBN:
9781426200410
SKU:
63113
Religions - Christian

The Complete Illustrated Guide to Catholicism - A Comprehensive Guide to the History, Philosophy and Practice of Catholic Christianity, with More Than 500 Illustrations

Uninvited - Living Loved - When You Feel Less Than, Left Out, and Lonely

The Heart of Christianity - Discovering a Life of Faith

The Rite - The Making of a Modern Exorcist